With the same people, we can’t expect different results 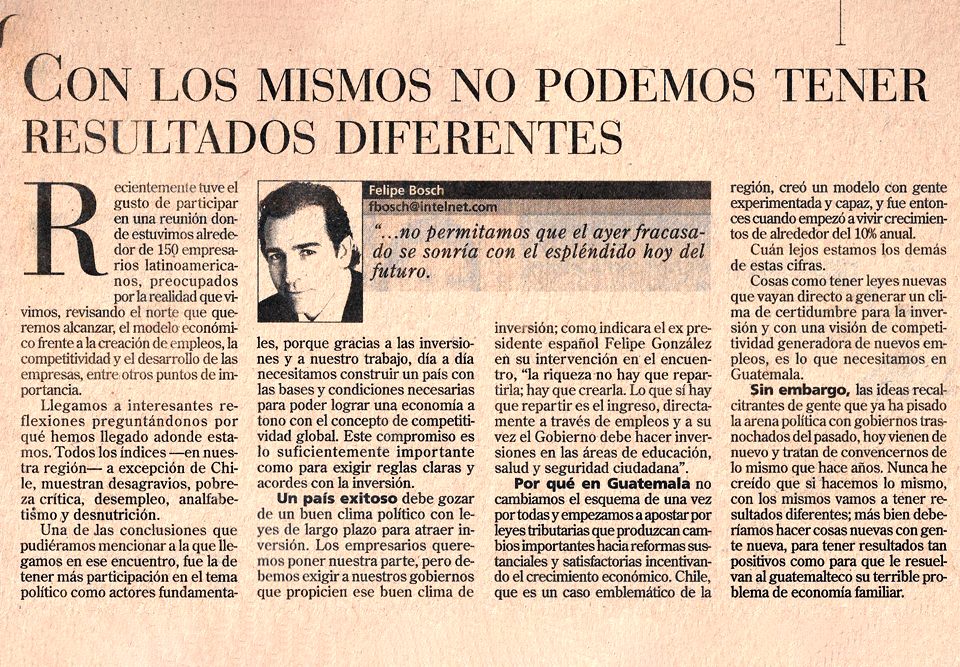 I recently had the pleasure of participating in a meeting with around 150 other Latin American businessmen. Concerned about the reality we are living, we reassessed where our “true north” is in terms of what we want to achieve, the best economic model regarding job creation, competitiveness and business development, among many other important topics.

We came to interesting insights while wondering why and how we got to where we are. All the indexes in our region, with the exception of Chile, show serious poverty, unemployment, illiteracy and malnutrition.

One of the conclusions from that meeting that we could mention was the idea to have more involvement in politics as fundamental actors, because it is thanks to investments and our work that, day by day, we need to build a country with the necessary foundations and conditions to be able to achieve an economy in line with the concept of global competitiveness. This commitment is important enough to require clear rules in line with investment.

A successful country must possess a political climate with long term laws to attract investment. As entrepreneurs, we want to do our part, but we must demand that our governments are conducive to this healthy investment climate. As former Spanish President Felipe Gonzalez said in his speech at the meeting, “wealth doesn’t have to be distributed; it has to be created. What we do need to distribute is the income. To do so directly through jobs, and in turn, the Government must make investments in education, health, and the safety and security of its citizens”.

Why don’t we, in Guatemala, change the whole approach once and for all, and we start betting on tax laws that bring about major changes towards reforms and satisfactory incentives for economic growth? The case of Chile, which is looked favorably across the region, created a model with experienced and capable people, and it was at that point that the country’s economy began growing at around 10% per annum.

The rest of us are far from these heights. Some of the things we need in Guatemala would be to have new laws that go straight to generating a climate of certainty for investment, with a vision of competitiveness that generates new jobs.

However, the recalcitrant ideas of people who have already trodden the political arena with administrations of the past are coming back to this day, and try to convince us to do the same as years ago. I’ve never believed that if we do the same thing, with the same people, we are ever going to have different results. Rather, we should be doing new things with new people in order to have such positive results as to solve Guatemalans’ terrible problems with their family economy.

I say all this because with measures such as those proposed, we would be protecting and supporting the informal economy, which accounts for around 70% of the total economy of the country. Moreover, because of measures such as these, smuggling continues to be rampant, punishing companies as well as honest and dignified employment.

We cannot repeat ourselves in the past without a vision for the future, because wealth creation itself is being put at risk, even as it is an indispensable source for fighting poverty, one of the greatest challenges we Latin Americans must face today.

Governments have a duty to provide clarity and certainty in order to attract investment: we in the entrepreneurial sector must generate more jobs within a framework of responsibility. We are all willing. But please, let’s not allow our splendid present and future to smile again on yesterday’s failures.