Central America and Guatemala: on a clear course 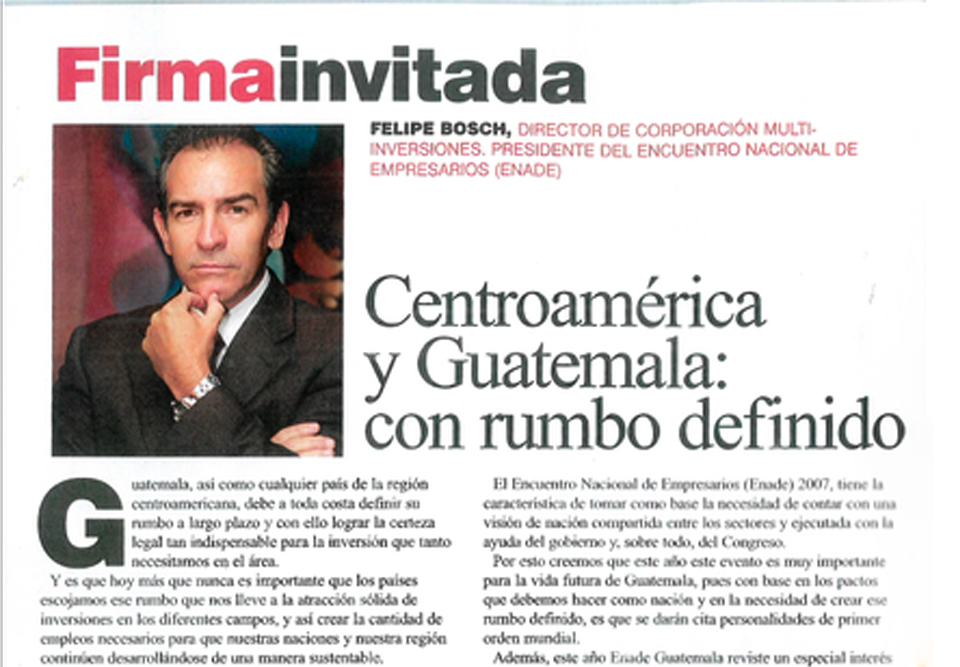 Guatemala, as well as any country in the Central American region, must at all costs define its long-term course, and thereby achieve the legal certainty so essential for the investment that we so badly need in the area.

Today, more than ever, it is important that countries choose a course that will lead us to attract solid investments in different fields, and thus create the number of jobs necessary for our nations and our region to continue to develop in a sustainable manner.

This has to happen, especially with the presidential elections in Guatemala on the horizon. Now, all that remains is the choice of who will occupy the presidential seat between the two candidates who made it to the second round.

It is today when we must think about the importance of the country’s direction, which is based on the strengthening of institutions. Next January, Guatemala will have a new administration. The important thing will be to continue with the good things and implement tasks that generate more investment.

For this reason, businessmen must strengthen the institutional links that allow us to work hand in hand with governments and thus contribute, through joint work, to the economic development of the country.

These experiences have been not only feasible on paper, but have implemented in other latitudes such as Spain. The former president of the Spanish government, Felipe González, who will be our guest of honor at the National Meeting of Entrepreneurs (Enade) 2007, will comment more closely on what was achieved in that country through the Moncloa Pacts in the 1980s.

These pacts, as we all know, laid the foundations for Spain to finish developing admirably, and to go from being a developing country to a first-order country. I am convinced that in order to achieve a developed country, we must first have a defined course for the country. That is to say, a medium- and long-term project. “A vision of a nation” that will allow society and the State to work with a shared and sure “true north” for the well-being of all the people.

The National Meeting of Entrepreneurs (Enade) 2007 is held on the basis that we need to have a vision of nation shared among the sectors and executed with the help of the government and, above all, of Congress.

That is why we believe that this year this event is very important for the future of Guatemala,

as world-class personalities will be able to weigh in on the pressing matters in the agenda, such as the pacts that we must make as a nation and the need to create that defined course.

In addition, this year Enade Guatemala has a special interest in the presence of the two presidential candidates who advanced to the second round. In this framework, they will present their message and their plans to become, one of them, the next president of the country.

We all know that these meetings are important because they allow the exchange of experiences and information, in addition to focusing our leaders towards achieving positive results in global indexes and thus being able to improve the country’s rating with international rating agencies.

The presence of Dr. Felipe Larraín, Professor of Economics at the Catholic University of Chile, consultant to the World Bank and the International Monetary Fund, author of Macroeconomics in Practice, Economic Development in Central America and co-editor of the book The Economic Transformation of Chile, will be fundamental. His main topic will be “country risk” and how to improve indexes on competitiveness.

Last but not least will be the intervention of political analyst Manuel Rocha, who is an expert in Latin American politics and has been U.S. ambassador to different countries in the region.

In previous years, this type of event has provided governments with concrete proposals and some have implemented them, especially in the area of competitiveness.

This year is very special, which is why the discussions will be framed around the sustainability of a national project of this nature, where economic and social issues play a central role in the short, medium and, above all, long term political landscape.