“Governments must work together” 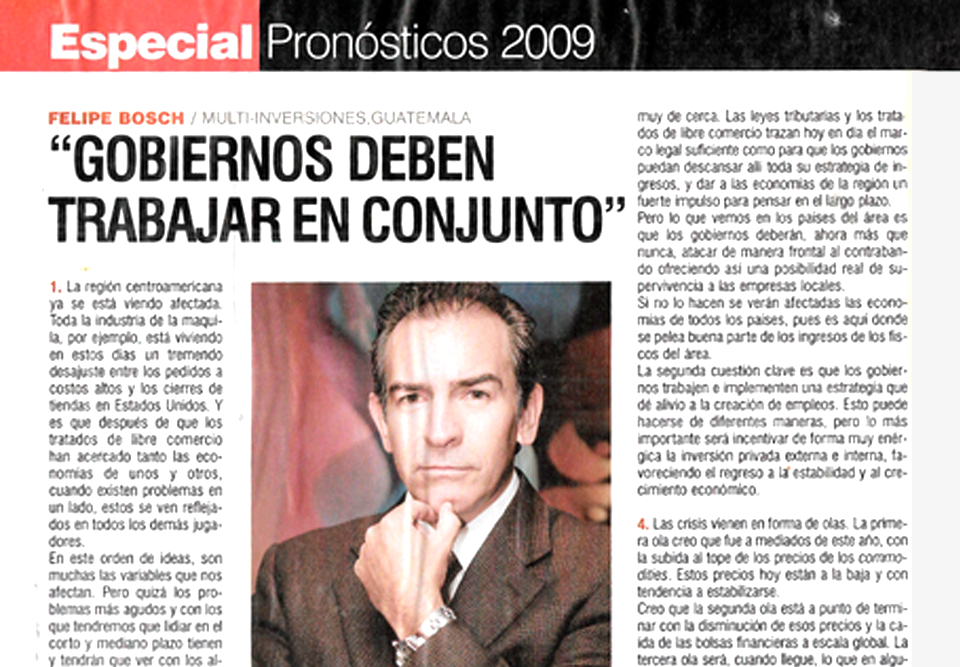 1. The Central American region is already being affected. The entire textile manufacturing industry, for example, is currently experiencing a tremendous mismatch between high-cost orders and store closings in the United States. And after the free trade agreements have brought the economies of both sides so close together, when there are problems on one side, they are reflected in all the other players.

In this order of ideas, there are many variables that affect us. But perhaps the most acute problems that we will have to deal with in the short and medium term have and to do with the high unemployment rates and the drop in the money received in our countries, due to the deportation of our immigrants to North American soil.

I believe that most productive sectors will be negatively affected in one way or another. Perhaps, the most notable will be everything that has to do with textile manufacturing exports, segments in the area of construction, tourism and banking. I believe that these sectors will have to readjust to a new reality that is relentlessly coming upon us.

That is why it is so important that governments work together with the productive sectors of each of the countries to emerge out of these hard times as soon as possible, as a region. I believe that, in a crisis of this magnitude, there will be very few sectors that will not be affected or even perceive an improvement in their finances.

From what I have seen, I would venture to say that the sectors that are likely to suffer the least are those that are in service activities. More specifically, those that are active in telecommunications, energy or similar.

2. It is virtually impossible to fully cushion the blow of an economic crisis of this magnitude.

What can be done is to work jointly between the different sectors in each country, and these in turn with their counterparts in the other countries of the region, in order to minimize it as much as possible. And the great strategic brain of all this articulation should be the government or governments.

The consequences of all that is coming are still difficult to quantify, but one thing is certain: the problem will definitely be not only economic but also social, and our region has really limited resources to deal with problems of this kind.

Perhaps our only hope will lie in what the government, together with the private sectors in each of the countries, can do. As a region, we must take up the challenge of revitalizing our economies, and the sooner the better, having in mind attracting foreign investments to help continue on the path of job creation.

3. The first has to do with the clear and decisive application of the laws. Everything that has to do with state revenues must be closely reviewed. Tax laws and free trade agreements now provide enough of a legal framework for governments to base their entire revenue strategy on and give the region’s economies a strong push to think in the long term.

But what we see in the countries of the area is that governments must, now more than ever, attack smuggling head-on, thus offering a real chance for local businesses to survive. If they do not do so, the economies of all the countries will be affected, since this is where a large part of the income of the area’s tax authorities is fought over.

The second key issue is for governments to work on and implement a strategy that provides relief for job creation. This can be done in different ways, but the most important thing will be to encourage very strong incentives for private external and internal investment, favoring a return to stability and economic growth.

4.  Crises come in waves. The first wave I think was in the middle of this year, with the rise to the top of commodity prices. These prices are now falling and tending to stabilize.

I think the second wave is about to end with the decline in those prices and the fall of the financial markets on a global scale. The third wave will be, when it comes, what some in the financial sectors call “the coming clean” of the economy, which is when all these corporate credit cards are paid off or their payment is restructured.

I believe that once all of this “coming clean” is completed, we will then be in a better position to make a more accurate forecast for the near future. Companies, in general, will start to show better vital signs from March or April 2009 onwards.

I think that contingency plans must be extremely serious; as serious as the original plan that countries must have to get us all out of this terrible situation. And, in that sense, the only plan that I see, which is not necessarily a contingency plan, has to do with openly stimulating the economy.

First, they must lower interest rates, which today are complicating credit tremendously, as well as the economy in general. At the same time, it would be extremely important to lower taxes. In this way, we attack smuggling and generate an important incentive for production and productivity in the area.

But all of this cannot happen without first working on a strategic plan for the Central American region. A plan that goes hand in hand with something that is not necessarily economic, but is of crucial importance: citizen insecurity. If the extremely high levels of insecurity do not go down, we will not progress quickly.