“The fight against poverty is everyone’s job” 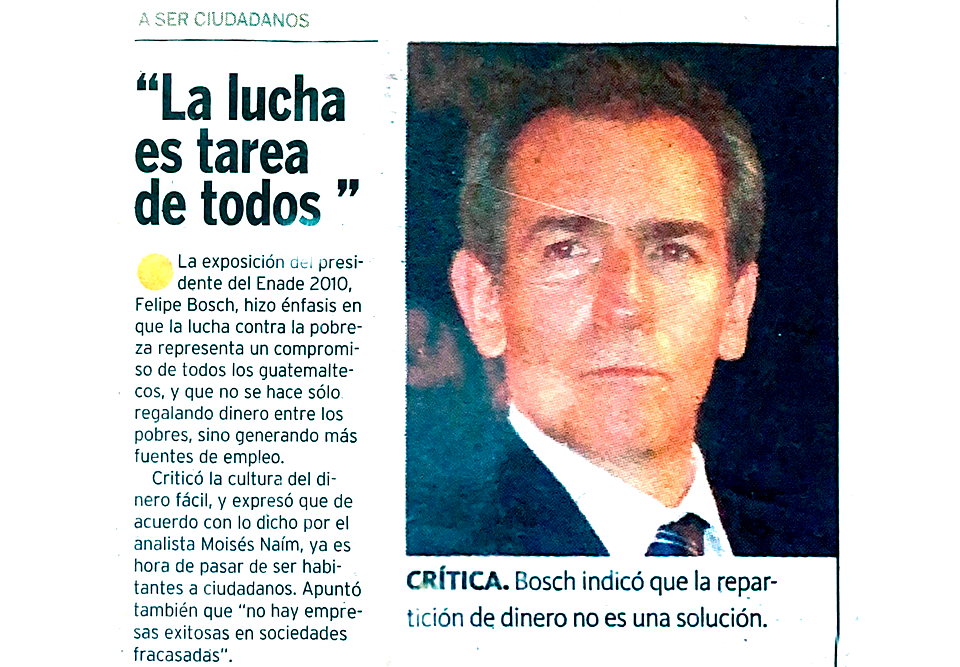 The presentation of the president of Enade 2010, Felipe Bosch, emphasized that the fight against poverty represents a commitment of all Guatemalans, and that it is not only done by giving away money among the poor, but by generating more sources of employment.

Bosch criticized the culture of easy money, and said that according to Venezuelan analyst Moisés Naím, it is time to move from being inhabitants to citizens. He also noted that “there are no successful companies in failed societies.

Then, the president of the Coordinating Committee of Agricultural, Commercial, Industrial and Financial Associations (CACIF), Carlos Amador, called on businessmen to join efforts to guide the country towards new horizons. Then, he stressed that it’s necessary to establish a strategy with a vision of the country.

He stressed the urgency of strengthening institutions and stimulating investment as a way to generate jobs and thus combat poverty. He also stressed that governance is a challenge for the authorities, so he called for a serious definition of the budget.

Meanwhile, the coordinator of the Crime Prevention Roundtable, Salvador Paiz, said it is necessary to promote accountability that includes public sectors, but also social and business sectors, as the imposition of a particular agenda should be avoided.