“Let’s Give Guatemala a Chance” kicks off 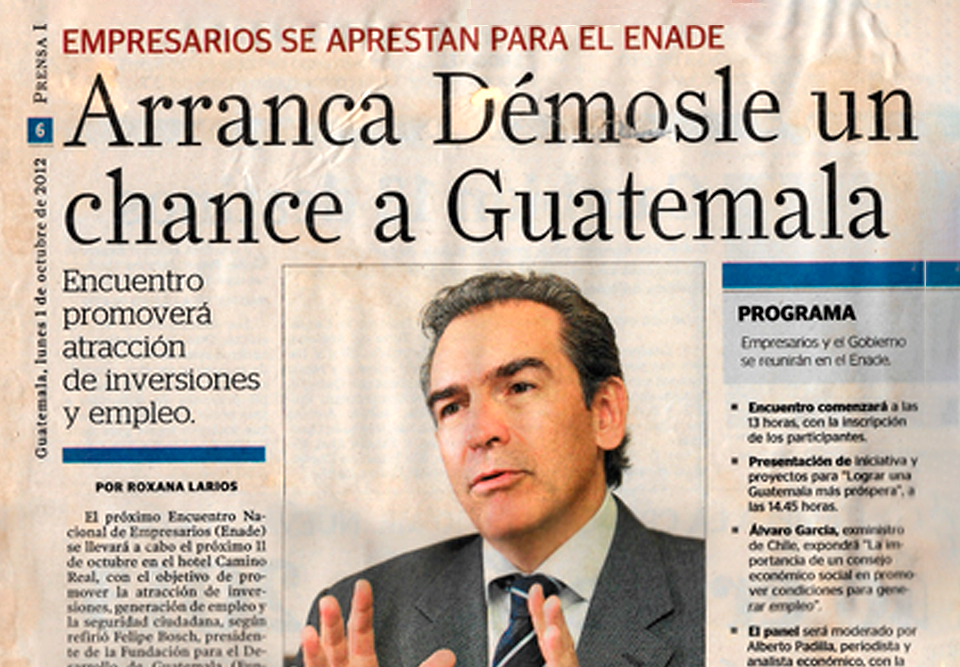 “Let’s Give Guatemala a Chance” kicks off

The next National Meeting of Entrepreneurs (Enade) will be held on October 11th at the Camino Real hotel, with the aim of promoting the attraction of investment, job creation and public safety, according to Felipe Bosch, president of the Foundation for the Development of Guatemala (Fundesa).

The businessman spoke with Prensa Libre to give details about this annual event in which Alejandro Toledo, former president of Peru, will participate as a speaker. Here are the most interesting aspects of the dialogue.

What proposal does the business sector present at Enade?

It is intended to evaluate three areas: how do we make Guatemalans more employable. The second is how, nutrition and education, among others.

The third area concerns citizen and legal security, which has to do with the way the country’s courts work to enforce justice and punishment.

The common denominator is the strengthening of institutions.

What role does the business sector play in strengthening state institutions?

It is directly related. In Guatemala we are, for the second consecutive year, in the last place of the World Economic Forum, which measures the costs of a company associated with security.

In health and education, companies also have an influence, since this directly affects the human talent in the company.

Companies that have healthier and more skilled people benefit from the work they do.

How do you evaluate the current government’s actions to generate this ideal?

This government has put complicated issues up for discussion, such as food and security.

These actions must be strengthened, and if we all give them the same importance, we as a country have the option of escaping the last places on the global metrics for security issues.

This year’s Enade proposal is not new; we have to follow up on last year’s proposal, which was related to getting out of poverty.

How much do companies spend on security?

It depends on the company, and it’s higher when it must deliver products throughout the country; but it must also pay security to move the products from the ports where they land to the company itself.

In addition, they must have cameras inside the company to record what happens, as well as security personnel. All this entails expenses.

The expense can be 15 to 22 percent, approximately, which is a tremendous cost,

That is why the issue will be discussed at the National Meeting of Entrepreneurs.

Who will participate in Enade?

As a keynote speaker we bring Alejandro Toledo, former president of Peru. He is an example because he was the eighth of 16 siblings, and one of his first jobs was a shoe shiner. Through his own efforts he got a scholarship, then he studied two master’s degrees, a doctorate and became president of Peru.

Businessmen from all sectors will come to the auditorium, but also leaders of society will be present, so that an atmosphere of dialogue and positivism will be engendered.

We are expecting 2,300 people, similar to last year’s number.

There will also be a panel to encourage dialogue on the above issues with the government and private sector.

“The event is expected to address issues of employment generation, investment attraction, support for society, and citizen and legal security.”  Felipe Bosh, president of Fundesa.