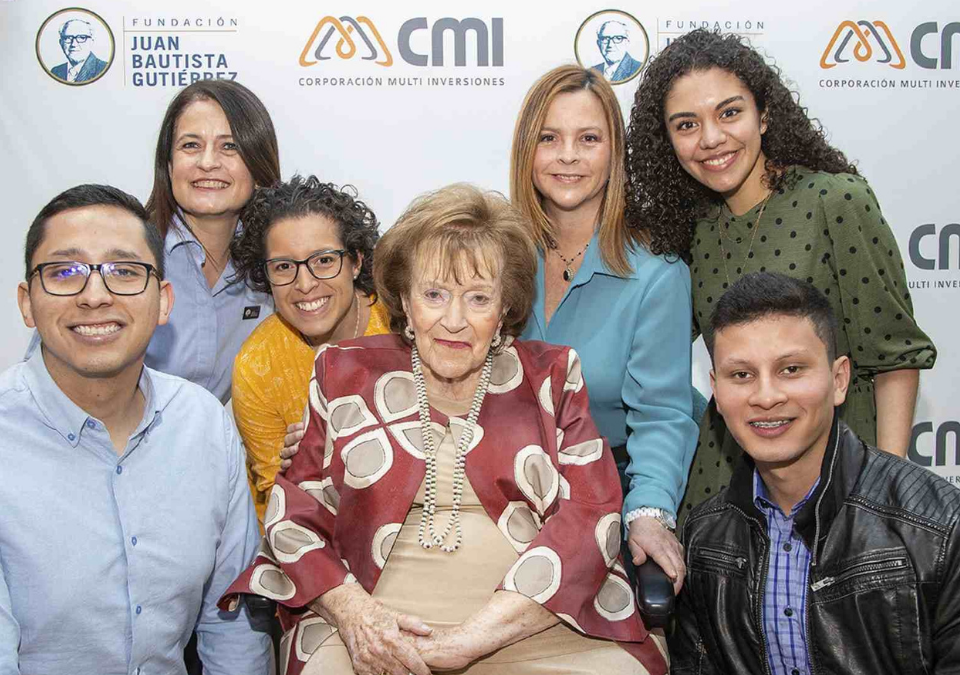 The students and graduates, who have studied thanks to the Juan Bautista Gutiérrez Foundation (FJBG), have a unique and special memory of Doña Isabel Gutiérrez de Bosch. Each one will be able to recount the moment when they met her and, even more, what they learned from her.

For current students, she was there from the beginning to the end of their career. For graduates, she attended their graduation and followed up on their professional career. That’s how “Doña Isa” was, as she was affectionately known. And it is in this way that the Universidad del Valle de Guatemala (UVG) remembers her especially.

Starting in 1986, Isabel Gutiérrez de Bosch presided over the FJBG, the social arm of Corporación Multi Inversiones, in charge of formalizing the charitable projects of the Bosch Gutiérrez and Gutiérrez Mayorga families. Through the Foundation, the education and health related programs run by each of the companies of the corporation were consolidated. In addition, she founded and presided over Fundaniñas, an institution that serves abandoned girls without resources to study, but with the potential to study and succeed.

Doña Isabel is recognized for being the first female member of the Guatemala City Rotary Club, since 1997. In 2005, she received the Order of the Quetzal, in the rank of Grand Officer. On the other hand, in 2020, she was selected by Forbes Central America magazine, as one of the 100 most powerful women in the Central American region.

Since 2001, FJBG has supported more than 180 extraordinary young people to study at UVG. Of these, 81 were enrolled on our campuses in 2020. The success of this program lies in the work of those who run it, following the example of Doña Isabelita. A very special detail about Doña Isabel is her presence at every graduation ceremony or award ceremony. These were events that she loved to attend, to motivate her students to pursue their careers with determination.

Thanks to her leadership, determination, ability, belief in teamwork, down-to-earth mentality, people skills and ingenuity, many young people have been agents of change in society.  One example is Mr. Luis Armando Jocol Sarat, the first recipient of an FJBG scholarship and current operations manager at Corporación Multi Inversiones.

For this reason, the Foundation of the Universidad del Valle de Guatemala and the entire UVG community paid tribute to Doña Isabel. The tribute highlighted her work and service to society, thanks to FJBG. In the posthumous act, the students of UVG remembered and thanked Doña Isabel for her interest and attention for the completion of their studies.

More than a memory

Felipe Bosch, Isabel’s son, thanked for the tribute, and informed that the FJBG scholarships will be recognized as the Isabel Gutiérrez de Bosch Scholarships. These scholarships will pay tribute to the woman who was concerned about the education of young Guatemalans.

In addition, the main plaza of the Center for Innovation and Technology (CIT) will also be named after her. “A place where our students will talk about technology and science will have the honor of being named after Doña Isabel,” said Jorge Eskenasy, a member of the UVG Board of Trustees.

UVG thanks Doña Isabel and the entire FJBG team for the commitment to deliver to Guatemala and the world, ingenious and committed people.